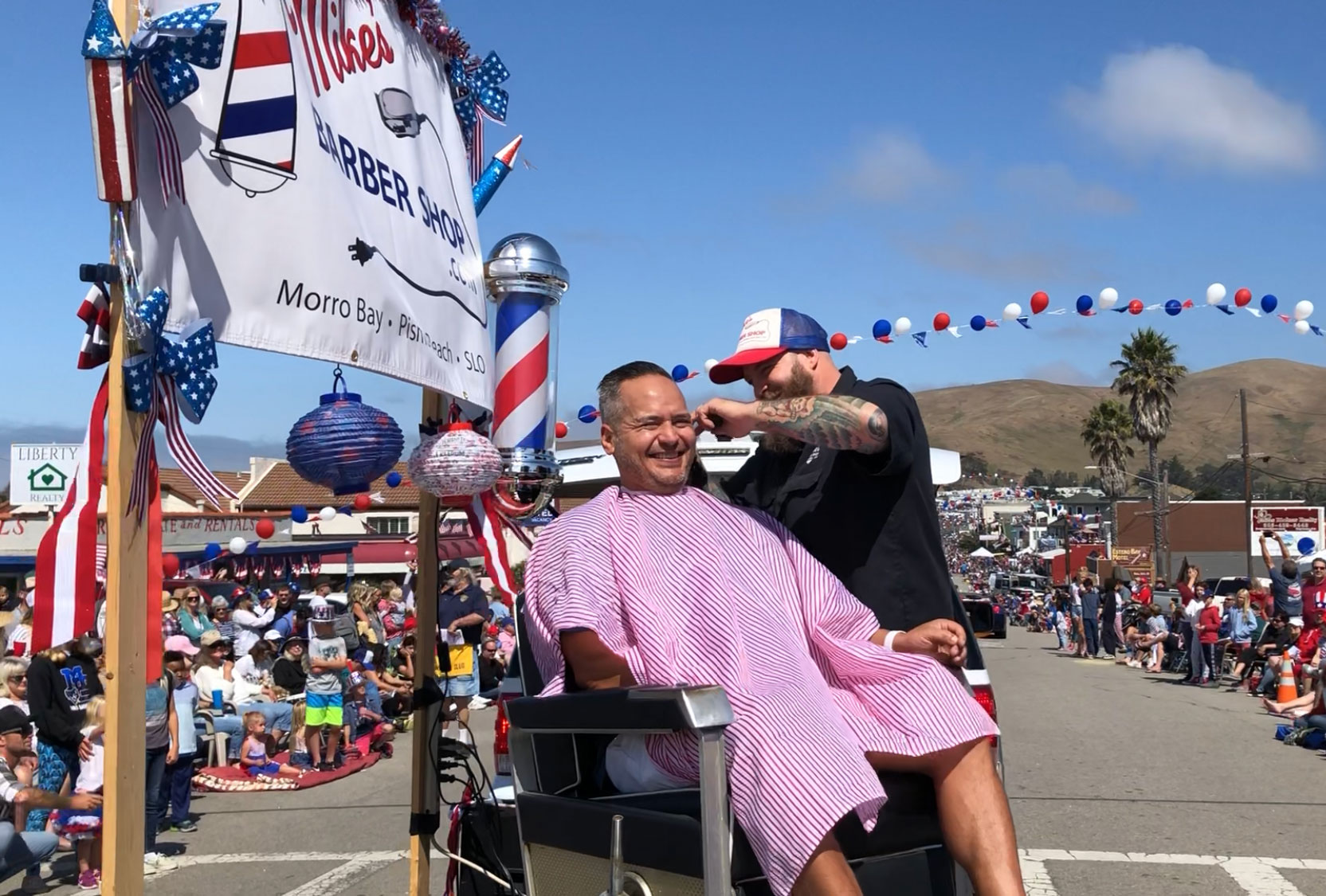 It means up before 7:00 am on the 4th of July and out the door by 7:45. The Mike’s crew grabs a quick breakfast of Dolly’s Donuts and breakfast burritos and heads to the already buzzing Cayucos. The tiny beach town that is Cayucos is home to a mere 2,500. However, the famous 4th of July parade draws tens of thousands of eager fans. The droves of celebrators line the usually sleepy streets, ready to cheer and catch flying swag. Mike’s barbers, family and friends assemble in a staging area alongside other floats.

The Mike’s Barber Shop gang have participated in the Cayucos parade for the past six years. Each year, the float receives a slight enhancement, as fresh ideas spring to life and new details are added. The group gathers in an assigned spot before the parade each year, and like a well oiled machine, they spring to motion grabbing decorations, staple guns, poles, banners and power drills and before 10am an open-air barber shop on wheels has been constructed with red white and blue accents.

Each year a designated “client” gets the coveted parade haircut and shave. This year, a long time friend and client of the shop, “Phil the Trainer” (college student by day, personal trainer by evening) climbed up into the big chair and grinned at the crowd as he braved a haircut and straight-razor shave courtesy of Barber Jon. Usual shouts from the crowd could be heard like “Shave his legs!” and “You’re brave!” as the straight razor made it’s appearance.

The parade makes it’s way slowly down Ocean Ave, under giant balloon arches of red white and blue swaying in the breeze. This year, a 1941 Chevy truck joined Mike’s procession, with barbers lounging in the bed, throwing out an occasional logo’d shirt to the crowd. The truck was purchased recently as a mascot of sorts, a nod to the original Mike’s location which opened its doors in 1941. Post-parade sees the crowd head for the beach, where this year a Mike’s pop-up tent could be seen with barbers and friends gathered, BBQing and enjoying the holiday.

Another parade in the books!